The annual Autumn Leaves 50k/50mile put on by the Oregon Road Runners Club is a great race for anyone looking to try their hand at an ultra distance for the first time or for someone like me, who looks forward to it year after year because of how easy they make it to want to come back. The course consists of a 10k loop, run five and eight times, respectively. It’s a very clean course, on well-maintained bike paths through the beautiful color-changing trees of the mid-Willamette Valley and along the Willamette River. There’s a turnaround about three miles out, but on the way back in the course veers off onto a single trail for the final 1.25 miles of the loop. This was my sixth time running the 50 miler in the last seven years, and after 48 loops around the course, its still interesting and beautiful and a great run.

I was out there this year to support a buddy of mine, who was running the 50k (his first ultra). I took the early start at 6am with a goal of getting through the first lap in an hour so that when he started at 7am, we could run together for as long as possible, like we do on many Saturday mornings. Because I’m a numbers nerd, I know my lap splits for every lap of every year, and my first two laps each year are always in the 64-66 minute range. So when I hit the end of the first loop at 56 minutes, I was both excited and a little nervous, wondering if I had gone out too fast with so many miles left. I made a stop in the port-a-potty, but the 50k race was still two minutes from starting, I was feeling good, and I didn’t want to stand around and get cold. I gave my buddy a waive, told him he’d catch up to me, and took off again. He never caught up (that’s no knock on him, he ran a great race and finished his first ultra strong, that’s just the kind of day it was for me).

Lap 2 was more of the same. I felt great, I ran toward a perfect sunrise over the river, hit the aid station at mile 1.4 of the loop (also at mile 4.75 on the way back in) for a brief cup of tri-berry Nuun (my favorite) and finished Lap 2 in 58 minutes.

At mile two of Lap 3 I was passed by a guy and gal running the 50k. I didn’t think much of it but a minute or so later I had the thought to catch up and run with them. I knew I would probably spend a good amount of the day running by myself, so the opportunity to run with others sounded like a good idea. To do that though, I had to make up the 40-yard gap they had on me. This was either going to be really good or it was going to be the reason for a crash later on in the day, I wasn’t sure which. They were running at a pretty good clip but when we got to the hill prior to the turnaround, the guy dropped back and walked while the gal powered up the hill. I followed her step for step. We cruised back in and I finished Lap 3 in 55 minutes. What?!?

Lap 4 I started to feel the first signs of fatigue and ran a conservative (well, for this day anyway, not compared to any other year) 60 minute lap, putting me at 3:50 for the first 25 miles. Did not see that coming. More than that, as Lap 5 got underway, I hit the 26.2 mark right at four hours, something I’ve never been able to do in an actual marathon. Satisfying, but still a long 24 miles to go on this day. I finished Lap 5 in 67 minutes and geared up for what historically has been the most difficult lap of the race, Lap 6.

Prior to the race I had budgeted walk breaks at various landmarks around the course in increasingly frequency. Usually just one minute, but in later laps I budgeted two or three minutes at the aid stations. I really was feeling good though and cut my aid station and walk times down to a minimum, 20-30 seconds at most. I just kept telling myself, “you can’t stay here, get moving!” There are very distinct landmarks around the course, the aid station, a bridge, the hill/turnaround, the bridge, the aid station, and then back to the start line. For 50 miles I managed the course 8-12 minutes at a time. I knew where the next landmark was, I knew about how long it would take me to get there, and I knew I could run for just nine minutes to the bridge, for instance, where I could catch a quick breather, before running nine more minutes to the hill. I managed to stay in the present and run, as I mentioned, in 8-12 minute sections all day. That, combined with the brief walk breaks, made a huge difference (you can waste a lot of time walking over 50 miles if you’re not disciplined about it. The worst feeling every is getting to the end, looking at your time, and realize you spent more than and hour or so just walking when you probably didn’t need to! It all just adds up).

By the start of Lap 7 I knew if I could just run two laps of 83 minutes or better that I would match my PR set in 2013 (when Steve beat me by 3 minutes in his first ultra!). Just don’t crash, I kept thinking. 12 minutes to the aid station. Nine minutes to the bridge, nine minutes to the hill, turnaround and run down the hill….Don’t stand here, grab some food and eat it while you’re moving….

A 75-minute Lap 7 and all I needed to match my PR was a 90-minute final lap. Just don’t do anything stupid. Keep moving, don’t go too fast. I still felt surprisingly good, all things considered. In the past my knees have been shot by this point in the race, but though I was tired and sore all over, nothing was debilitating. I just kept moving. As I hit the final aid station on the way back in, I knew I was going to do it. I had 1.25 miles left, about 15 minutes through the trees on the trail. As I emerged and ran through the finish line the clock read 8:38:47…a 17-minute PR!

I made a it a few more feet before falling to my knees and with my head in my hands, wept. It’s been a difficult few months for me as I’ve battled to overcome depression. You can read about it HERE, and watch my post-race video HERE.

If someone had asked me to write down what I thought my best possible time would be on my best day, I maybe would have written 8:50. Going in, my long runs had been a couple of 15 milers and a 17 miler. I knew I would finish, I just didn’t know if it would be nine hours? 10? So to see how the day progressed, and to come in at 8:38…man, I’m getting a little misty-eyed just thinking about it again. In short, I ran my perfect race. My perfect run.

Onto the Mesa-Phoenix Marathon in February. (Come join me there! Promo code “SaturdayMarathons10” saves you some money on the registration!) 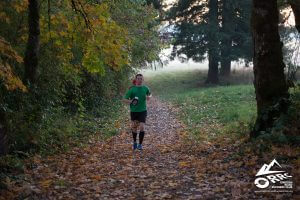 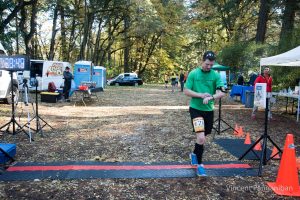 Finish Line! Look at that clock!! 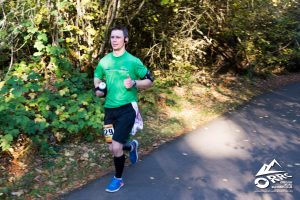 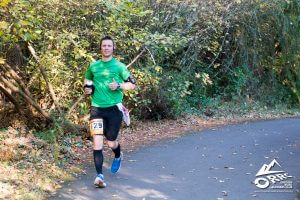 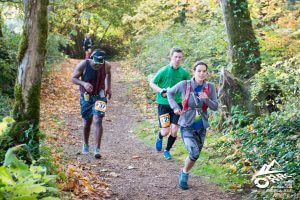 Speeding along (trying to keep up) in Lap 3 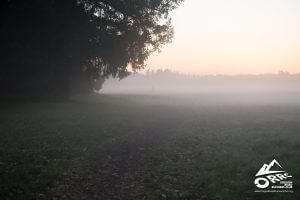 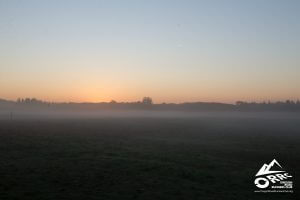