I ran the Mesquite Tri-States Marathon in 2012. This was actually my first marathon. I am writing this review after having completed five marathons so I have a little more perspective.

Mesquite is small-ish town in Nevada about an hour away from Las Vegas. For the 2012 marathon, the event was run by the Casablanca hotel. They are no longer running the event. It is now run by Planet Ultra.

The organization of the race by Casablanca was okay. There were plenty of hotel deals in Mesquite. The race swag wasn’t great. The shirts were plain. The medal was very cool though. I’m sure it will be better with Planet Ultra involved. 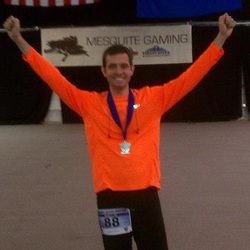 This race has a point-to-point course. We took a bus from Mesquite, NV to Utah. The great thing about this course (and why it is called the Tri States marathon) is that you start in Utah, run through Arizona, and then finish in Nevada. Very cool! The course is mostly downhill with a few rollers on the latter part of the race. The elevation chart really hides those hills, particularly one at mile 21 (Why does there always seem to be a hill this late in the race?). The scenery was beautiful and the weather was perfect. We finished at the Casablanca hotel. They had a nice modest finish festival.

If you want a low key race with fewer participants, fewer spectators and a great course, then this race is for you. I actually remember chatting with another runner during the marathon saying she specifically chose this course because there would be fewer people. Everyone running was very nice and I made some new friends.

The aid stations were stocked decently. I have seen better but I didn’t know any better at the time. The volunteers were outstanding as always though.

This unique Tri-State course with lots of downhill is great choice, especially if you’re looking for something less crowded. It was a great easygoing race for this first timer.