I had read a number of books about ultra-runners, including Born To Run , Scott Jurek’s Eat and Run , Dean Karnazes’ books, and Relentless Forward Progress . I wanted to see what this whole ultra thing was all about. Before my first ultra, RJ had completed two 50 milers, so he was a great help.

I had previously attempted a 50 miler the month before and did not complete it. During the race, I had horrible stomach issues. I knew this was unusual for me because I rarely have stomach problems. It may have been the heat or residual fatigue, but I had to call it quits after 50k. They didn’t have an official 50k, so I took an official marathon time. Completing my first 50 miler was also about redemption and proving to myself that I could do it.

I decided to do the Autumn Leaves 50 miler. This is the ultra RJ has done twice before. It’s a relatively flat ultra and logistics seemed perfect for a first timer like me. RJ was planning on either volunteering at the race or running it. Shortly before the race, he decided to run it. Great! He can suffer with me. 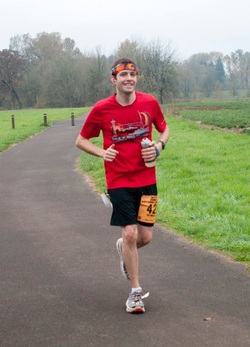 I flew in Friday, picked up my packet, slept a little, and then at 6am we were standing at the starting line ready to go. The weather was absolutely perfect. It was in the 50s and no rain. The scenery was beautiful.

The course is a 10k loop with mostly bike path and some trail. You run eight loops. Normally I’m not a huge fan of looped runs. This looped course worked well because I could set all my gear up at the main station and return to it every lap. Also, the scenery was so beautiful to me that I never got tired of it. Since I live in the desert, I don’t get to see such beautiful autumn colors.

However, I didn’t see much on the first lap though because we started out in the dark. I got my headlamp on and got ready. This is it. I told myself I’m definitely doing 50 miles this time. There was such a relaxed atmosphere. Instead of people toeing the line, everyone was casually getting ready. I guess when a race is 50 miles, there really is no rush. As we began, RJ and I ran at a relaxed pace. I was just soaking it all in.

The first lap went well. I transitioned quickly into the second lap. I only stopped briefly to shed one of my layers as I warmed up. I started listening to my audiobook and did that for the next few laps. I saw a beautiful doe deer along the side of the course.

The volunteers were great! Everyone was so helpful. They would take my water bottle and refill it. They would get whatever I asked for if they had it. I had to make sure I thanked them so they wouldn’t only remember me for barely coherently making requests, “Water!” “Gels!” There was also a volunteer directing runners onto one of the trails. The guy was out there dancing almost the whole day. It was very uplifting to have someone be so positive every time you ran by. There were also a couple of volunteers early in the morning at one of the turnaround points directing people. These two ladies were having a hulu party complete with grass skirts, funny signs, and mini-mai tais. I saw one runner take one. Hopefully he didn’t think it was water! 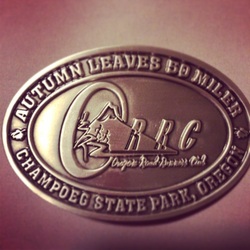 By the third lap, the sun was up and I ditched the headlamp before starting it. I enjoyed the course and settled into my pace. My feet had begun to feel sore so when I finished the third lap, I switched into my Hokas. I was glad I did! My feet felt better for a while until close to the end. I also switched into a fresh short sleeve shirt.

I should also mention that Pam Smith, the female winner of the Western States 100, ran at the event. She won the 50 miler. She passed me a whole bunch of times. It was amazing to see someone perform at such a high level!

After the fourth lap, I had finished 25 miles. I was halfway done. This is when the mind games began. I was already worn out from running 25 miles and the thought of running 25 more was daunting. This made the fifth lap really tough. The race also gives you the option to drop down to the 50k after five laps. I didn’t want that to tempt me so I mentally yelled, “NO!” whenever that temptation entered my mind. I would tell myself, “This is what you came here to do. You flew all the way up just for this race. You are not stopping.” Plus, I really wanted that sweet belt buckle.

As I came in to finish the fifth lap and start the sixth, it was a quick transition. I was still mentally telling myself, “NO! I won’t stop.” I had to get out of there and keep going. This idea of going beyond marathon distance and even beyond 50k is a paradigm shift I was adjusting to at this point.

By this time of the race, I was getting hungry. On these later laps, I knew I needed calories. I was consuming gels regularly (about every half hour) but I needed something more. I looked around the aid station tables and tried to see what was appealing and what my stomach would like the most. I didn’t want nausea to be a problem again. I tried a little square of PB&J. That worked. An aid station volunteer offered me warm broth and it tasted glorious. It was like the nectar of the gods. I loved it and it really helped. Throughout the race, I had a bit more of that and some fruit. I snuck a few gummie bears in there. It was likely the severe lack in calories but when I bit into a slice of watermelon, I thought it was the best watermelon I had ever tasted in my life as the juice ran down my chin and I deliriously awed at its flavor.

The sixth lap went well; I settled into things and accepted that I was just going to keep going. I had switched from my audiobook to music and was enjoying that. On this lap, I ran by a park with a couple of guys playing Frisbee golf.

I wish I had a picture of the perplexed look he gave me after I said that. I might as well have said, “A gazillion miles.”

Then they both broke into a cheer and yelled, “Yeeaahhhh! Fifty miles! Woooo!” 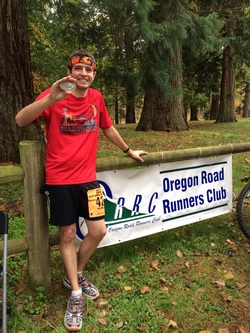 The seventh lap was just brutal for me. I was beat down. So many things were hurting. I tried to motivate myself mentally but it wasn’t doing much. I re-informed myself that this race was why I came. I talked back to myself that I knew I would finish but I was too worn down to push harder. I reminded myself of the buckle. I told myself I would get one no matter what. This was really quite an argument. Finally, I realized how many miles I had left and it seemed so manageable. That was encouraging and I was able to move along a bit better. I pictured myself finishing and got a little sentimental. I was really going to do this.

In the beginning, RJ and I ran together. The first couple laps, I pulled ahead. Then he passed me and the rest of the laps until this point RJ was ahead of me. He was more familiar with ultrarunning than me and I was completely at peace with him finishing before me. When I was trying to motivate myself, I would tell myself that RJ is “the deer.” Those who have read Born To Run might recognize the term. It was implying that RJ was the deer and I had to run him down. Then I mentally argued with myself again saying, “RJ is NOT the deer. He is my FRIEND.” Yeah, I was getting a little loopy.

The last lap was amazing. I was worn down but I didn’t care. I just kept going. I had no desire to slow down or walk. I just wanted to keep going. I even sped up. At one point I thought I should take a walk break but mentally, I just had no desire to do it. I had conquered whatever mental block was holding me back the previous lap. I was so excited to finish this thing! I ended up finishing a few minutes ahead of RJ. I was so surprised when I passed him because I thought he was so much further ahead of me. We both finished just under our goal of 9 hours.

Pure joy at finishing! We accomplished our goals. I received my belt buckle. I was so happy as I stretched, ate food, and wound down. I couldn’t believe it. I had done it. The race director asked if it was a PR for me. I replied that it was since it was my first 50 miler! He then offered me a whole box of Hammer recovery bars. What a great race company!

Special thanks to all my friends and family that made this possible and supported me.