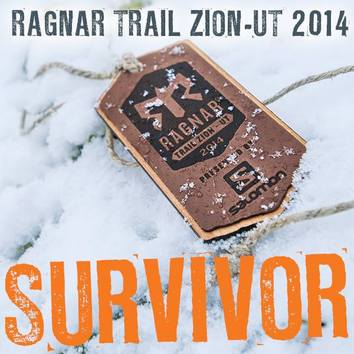 The above picture is joking a bit. Nonetheless, the Ragnar Trail Relay in Zion was quite an experience!

I previously shared some thoughts I had about the Ragnar Relay series on this blog. I wish to add the unique experience I had at the 2014 Ragnar Trail Relay in Zion.

I wasn’t planning on participating in this event but a friend (that works with Ragnar) of mine had a free open spot on his team. It’s hard to pass up a free race (Thanks Joseph!), especially an event like Ragnar. 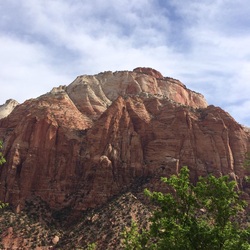 The drive up through Zion National Park was gorgeous as always. You do have to pay the $25 park fee just to drive through, though.

They changed the logistical setup of unloading gear and shuttling people. Previously, you shuttled gear and people. This year, you dropped your gear at one of the multiple drop-off points, drove to the parking area, and were shuttled back to the campground. Ideally, you should travel to the event as a group to do this more efficiently. Since I went up by myself, I had to leave my gear with a volunteer. Once I got back to the campground, I had to carry my gear searching for my team. Keep in mind there is very limited cell reception. It was nearly impossible to get a message through.

I went to the village because eventually everyone has to go there for the exchange and found my team there. Upon reaching our camp site, I begin to set up my tent. I laid out the tent.

Then… I realized there are no poles. No stakes either. Crap. 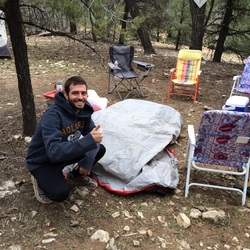 I had borrowed a small tent from a friend and neglected to double check it before leaving. This was poor planning on my part.

Normally, I would just sleep under the stars. However, the forecast showed 100% chance of rain. I decided to turn the tent over, using the bottom tarp to cover me from the rain. I borrowed a cot from someone on our team to keep my sleeping bags off the ground. It actually turned out to be quite warm, like a little cocoon.

The trails were the same loops as last year. The scenery is beautiful. I ran the red loop first and had a blast. Last year, I did this loop in the dark so I enjoyed running it during the day this year. 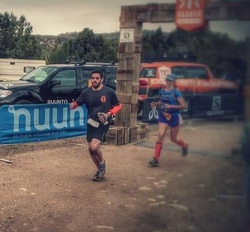 I had a bit of foot pain from a foot bone issue and some peroneal tendonitis. I was able to run, just a bit slower and with some discomfort. Fortunately, one of the vendors, Mountain Land Rehabilitation, was providing round-the-clock physical therapy. They really helped me by massaging and wrapping my foot.

The rest of the Ragnar Village was much like last year, which was great. They had some great vendors, including Salomon shoe demos, free Nuun refills, and many others. I love those campfires.

By the time I ran my next loop (yellow), a light rain had begun. During the run, the rain picked up. Fortunately, I was still warm throughout the run. I was just wet. Upon finishing, I grabbed a s’more and huddled into my makeshift cocoon for some rest. I was kept nicely dry and listened to the relaxing noise of the rainfall. 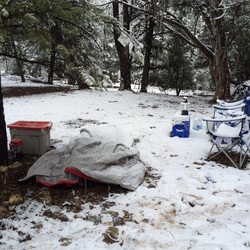 Shortly after I woke up

I was awakened to some commotion. People saying, “Are you seeing this?” “Can you believe it?” I realized the tarp was pressing against me, weighed down by something. I looked out of my covering and it was snowing! There were big flakes coming down thick and it was sticking.

To our alarm, we realized the runner after me was still out there! A loop that should have taken about 2 hours, took her about 4 hours. After my run, the trails had gotten much worse due to the rain and snow. The footing was sloppy, slowing down many runners. Runners slowing down coupled with the plummeting temperature and snow caused runners to become hypothermic.

Runners and Ragnar were expecting rain and cold. I don’t believe anyone was expecting so much snow! Many groups were discussing how safe it was to continue sending runners out. There was an awkward period of time where people were unsure what to do or what Ragnar would do. Once the trail markers became covered with snow, causing runners to get lost, Ragnar decided to call off the rest of the race. 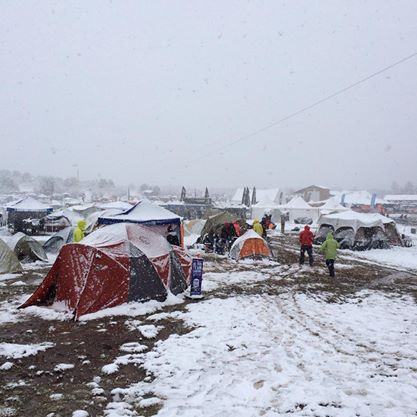 I believe this was the right decision. Ragnar had to send people out to find the lost or unaccounted runners. Fortunately, everyone was recovered. Thank goodness.

Ragnar distributed the medals. Many runners were uncomfortable with the medals since they didn’t really “complete” the race. However, I feel they survived this unique experience, so they earned it.

It was a bit sloppy with everyone trying to pack up and exit on muddy/rainy/snowy roads. I was impressed with how things went given the conditions. Fortunately, Ragnar got the shuttles running quickly. I was glad my snow-covered car didn’t get stuck!

Overall, I did enjoy myself and it was certainly a unique adventure!

The drive back through Zion was beautiful with the snow and rain flowing down the rock formations.