I’ve been fortunate enough to run the Seattle Rock ‘n’ Roll Marathon each of the last four years and was able to pace Steve for the first 12 miles in what would be a new PR for him in 2013 (which he then lowered in Pocatello later in the summer). Unfortunately 2014 will not be my fifth due to schedule conflicts, but with the race less than three weeks away now, we wanted to give a brief overview of what to expect on June 21st.The folks at the Rock ‘n’ Roll Marathon Series changed the course in 2012 and it has remained the same ever since. In my opinion there’s good and bad tradeoffs to the changes, but they are what they are, so here we go:The race starts in the heart of the Seattle Center, home to the Space Needle, Key Arena (may the Seattle SuperSonics rest in peace) and a ton of museums, carnival rides and other activities for all ages. It’s also convenient to use the monorail to get to the starting line if you don’t want to walk from a downtown hotel. Which brings me to the downtown hotels. If you haven’t already booked one, good luck. I hope you have a steady income or available credit. And be sure to budget for parking if you drive.The starting area is a good set up. Lots of port-o-potties in different locations to move people through as quickly as possible and nice open areas to walk wherever you need to go. Get yourself to the starting corrals and get ready.

The first 2-3 miles are run through downtown Seattle. Growing up in a small town and now living in a city where the tallest building is seven stories, I love this part of the run. Lots of people line the sides of the road and there’s a great atmosphere. Don’t be surprised if your GPS starts doing weird things as the height and proximity of the buildings cause your satellite reception to go in and out.

After a few more miles through some neighborhood streets you’ll hit the shores of Lake Washington at about the 10k mark. Enjoy the next 12 miles. They. Are. Awesome. At Mile 8 you’ll enter Seward Park and take a loop around the perimeter. At 10.5 miles you’re out of the park and running back up Lake Washington Blvd the way you came, This is a nice shady tree-lined bike path with the water to your right. Out in the distance is the I-90 bridge you’ll be crossing in about 5 miles. But before you get there, there’s something you need to see and experience and feel. Turn your music off, take your earphones out and appreciate this (take a minute, grab a tissue, and watch…I’ll wait):

You can also go HERE to learn more about Wear Blue: Run to Remember (watch the video on their home page also…but be sure to grab another tissue).Back to the race. After a short out and back, you’ll make your way onto the I-90 bridge around mile 15. Have I mentioned yet that the race has basically been flat to this point? The bridge run is approximately three miles out and three miles back in and for me, it’s been the make or break section every year. So much can happen here because it’s so unlike the rest of the course. A few things to be aware of:First, the weather. Up until this point you’ve been running through downtown or along tree-lined streets and paths. You’re completely out in the open on the bridge. Second, if it’s a sunny day, you’re going to be hot. If it’s windy, there’s no hiding. There’s downhill and uphill sections on each side of the bridge and before you hit the turnaround point and immediately upon arriving back at mile 21 you’ll run through tunnels which have a terrible camber to them. There’s no hiding from that either.Running back towards downtown you’ll see (and then come up on, and then pass by) CenturyLink Field (home of the Seahawks) and Safeco Field (home of the Mariners) and then you’re in the final stretch to the finish line. But don’t think you’ve made it yet, because when you make the final turn to the finish line you get to run up one of the steepest hills of the entire course before crossing the tape and receiving your medal. Really, I don’t know how or why they can’t find a better way to finish.

The finish area is not set up as nicely as the starting line. You have quite a long way to walk to get food, meet up with family in the reunion area, buy overpriced gear and listen to a band who was popular, well…back in the day, let’s say (wow, did my personal opinions just get exposed there? My apologies).

Overall, the Seattle Rock ‘n’ Roll Marathon is an above average race to run, if you don’t mind sharing the course with 25,000 runners and can put up with a few less-than-stellar characterists that have been mentioned here.

Good luck, have a great race, and let us know how it went. We’d love to have you submit a post-race review for us!

Below is the official Course Tour video (ignore the mile markers in the video. I don’t know who put this together, but they’re not even close). 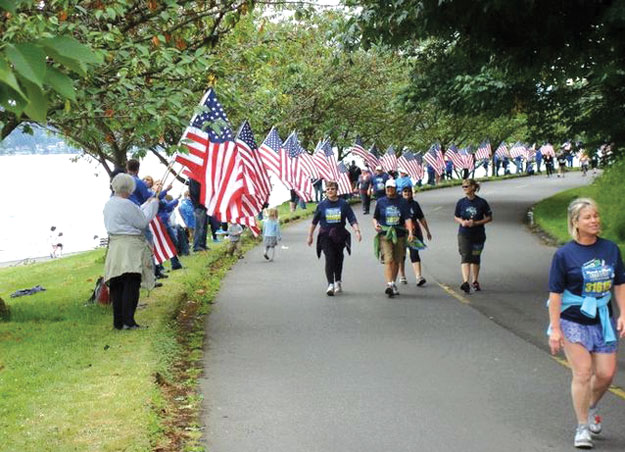