I have done a bunch of Desert Dash trail events before. They put on trail running events around Las Vegas. They put on great events with a friendly, relaxed, family-style atmosphere. It’s the type of atmosphere that encourages runners to take a seat after a race, relax, and enjoy the company of their fellow trail runners. They do a variety of distances at their events from 5k to ultramarathon. They also have some more novel challenges like their Dirty Vert race where you race up trails in Bootleg Canyon and take the FlightLinez zip lines down. They also do dirty double races offering races in the day and evening plus an award if you do both. If you are looking for a trail race in the Las Vegas area, I highly recommend Desert Dash. They also do group runs on some of the local trails. The folks at Desert Dash have always been good to me. For example, at one of their races, Rob (one of the Race Directors) knows how much I like running buffs and showed me the Altra buffs they had just got in and gave me one! 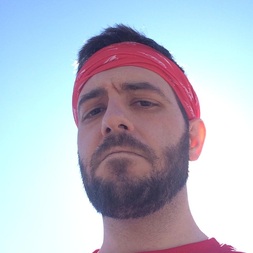 The Trails of Fury 50k is located in Cottonwood Valley, just outside Las Vegas. The 50k consists of 3,800 ft. of elevation gain. The trails themselves can be technical (they’re often rocky here in Vegas). The trails at the race were superbly marked. Let’s just say that if I didn’t get lost (which happens to me from time to time) then they’re well-marked. The course was open to the public during the race and I ran into quite a few mountain bikers. Most were courteous in letting me by.

“Way to go, man!” he yelled as I was almost out of earshot. 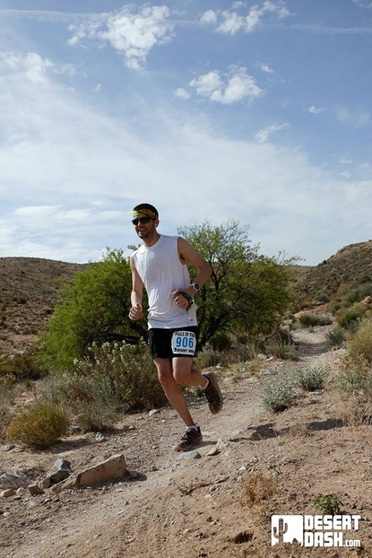 The morning really started out great as I drove to the starting line. In my rear view mirror, I could see a beautiful sunrise. This seemed like a good omen for the day. The race started at 6am. I was concerned about the temperature in Las Vegas during late May. The high the previous weekend was 101 degrees. The high the subsequent weekend was 99 degrees. However, it turned out to be much better with temps starting in the 60s and a high in the 80s.

There weren’t very many of us doing the 50k and there were some registrants that appeared to be running late. All the other distances would be starting at a later time.

We started off with one runner going much faster than the rest of us and he would end up winning by a very healthy margin. I settled into exchanging 2nd and 3rd place with another run for the first 9 miles or so.

There were some absolutely spectacular views of the area. The morning sun with the rich vibrant colors of Cottonwood Valley had me looking at awe at my surroundings. Those are some of the best trail running moments. I wish I had a camera but taking a picture would almost ruin being in the moment and just experiencing it alone. I had to settle for mental pictures in these instances.

I kept on top of my fueling throughout the race. I brought some GU gels with me and consumed the Island Boost at each aid station. The Island Boost worked great. It includes coconut water and my body responds well to it. I only wish I had brought some salt with me (as I will mention soon). Also, at about mile 8, the other 50k runner nearby, Frank, offered me a key lime sugar cookie his wife made. Key lime cookie? Heck yeah! It was great. Props to Frank’s wife.

As I approached the aid station near mile 11, I noticed another runner in the distance.

Sure enough, he caught up by the aid station. At this point, it became 3 of us running for 2nd, 3rd, and 4th place.

As I approached the aid station, I didn’t notice a beautiful white mustang until he was right next to me on the trail! I knew there were wild horses in the area but did not expect to encounter any, especially like this. Fortunately, one of the aid station volunteers took a picture! 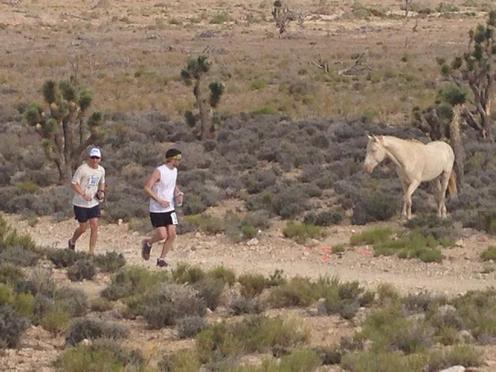 This race has the BEST spectators!
The aid station volunteer informed me there was a herd just down the cliffs near the aid station. I couldn’t miss this! Sure enough, I ran over (in the wrong direction) to go look and saw the herd. One of my fellow ultrarunners, later chastised me (partially in jest) for taking the time to do this during a race, but I simply could not miss seeing these wild horses. Cottonwood Valley is one of the few places in the US that still has wild horses.

As I left the aid station, despite the exhilaration of the unique experience, I fell into a low. I was feeling worn down and things were heating up. I began feeling cramps/nausea. I quickly fell back to 4th.

I remained in 4th as I entered the main aid station. Rob reminded (warned) me, that I was currently out of medal contention. My friend Joseph had finished his 10k and enthusiastically greeted me with a high five. I used the restroom, got fuel, and mentioned my cramps. Joseph started suggesting some salty items. I opted for the pretzels. As I finished up, Joseph pointed to the distance at the other two 50k runners and said, “They’re right there. Go get them!” 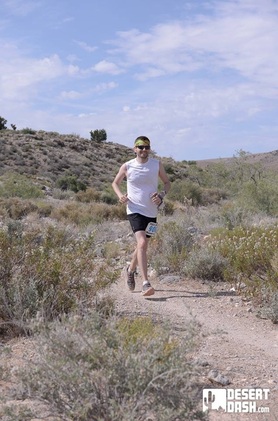 After the aid station, my stomach felt much better. I made a mental note to grab pretzels at every aid station after that. The next part of the race was a smooth downhill and I cruised. I caught up to the other two runners by the next aid station. I refueled quickly and left the aid station in 2nd place.

After a couple miles of downhill, the next 6 miles after that were a mostly uphill grinder. The heat intensified. The three of us were trading places between 2nd, 3rd and 4th. We were all running low on water and fuel. At one funny moment, the three of us were clustered together and we all just started walking. I was in front and asked one of the other runners, Mark, if he wanted to pass. He chuckled and said, “Nope!” As we approached the end of this grind, Mark took off. At first, I let him go. Then, I didn’t want him to get too far ahead and out of sight, so I started running again too. We got on a smooth downhill that I have run plenty of times in this area before. I felt great and picked up the pace.

My Garmin stopped keeping track of distance around mile 23 but kept tracking time. This had never happened to me before but I knew the course well so it wasn’t a huge concern.

Mark and I arrived at the aid station at approximately mile 28 at about the same time. This was my chance. I fueled as quickly as I could and bolted out of the aid station! I grabbed 2nd place and refused to give it up. I tried to keep out of sight of the other two runners but on the last mile I could see Mark running hard in the distance. Fortunately, I had enough of a lead to hold on to 2nd place. I was ecstatic!

I wasn’t planning on pushing myself as hard as I did in this race but I couldn’t resist the competition. I was glad for the experience.

After arriving to the finish, Rob informed me that I had won the raffle! I won a free massage from Thrive Massage that I would sorely (pun intended) need after a 50k.

But it doesn’t end there.

I had signed up for the dirty double.

Wait. What was I thinking?

I returned later that evening to run the Moonlight Madness 5k. With a relaxed pace, I completed the 5k (making a total of 55k for the day) and was rewarded with a sweet Trails of Fury pilsner glass.

The whole event from beginning to end was an exceptional experience.