Let me introduce you to the greatest 2.6 mile race in the world held on the best day of the year (that it’s also my birthday is no coincidence at all): the 4th of July Monmouth-Independence Mini-Marathon.I grew up in the town of Monmouth, OR, population approximately 8,000, and went to a high school that was shared with the adjoining town Independence, population approximately 7,000 (both have since grown slightly, but are still below 20,000 combined). Located about 15 miles southwest of Salem, it’s not sticks, but there’s not much going on there either (15 years later, there’s slightly more going on, but still not much). Monmouth had one stop light (it now has a second) and Independence still only has one. As a kid growing up there it can be a little boring without much going on. But the one thing that the joint community does do is 4th of July. And it does it big.

The crowning event of the Western Days (yes, days, like three or four of them, depending on which day of the week the 4th lands on) celebration is the Grand Parade, which starts at noon in Monmouth and runs for about three miles to Riverview park in Independence. 15 minutes prior to the start of the parade, for the 42nd year in a row, the 2.6 mile Mini-Marathon will be held.

The mini-marathon is simple. It starts at Monmouth City Hall, has no turns, drops 47 feet in elevation from start to finish, has cheering crowds multiple people deep on both sides of the road the entire race and finishes at Independence City Hall 2.6 miles later. It’s a foot race. And it attracts upwards of 500 runners or more every year. In a word, it is awesome.

In 2008 this race represented the first miles I had ever run. 17 marathons, three 50 milers, a 50k and three half-ironmans since would have never happened if I hadn’t been so disgusted with myself for how wrong I was about my state of health and conditioning at the time. The 2009 race was the first time I actually prepared for and trained for a run (if only for a month) and from then on I was hooked. The rest is history.

So if you are ever find yourself in the Willamette Valley (or want to be), make a date with the mini-marathon on the 4th of July.

Here’s a quick (because it’s a short race) preview:

You’ll start at City Hall (where my extended family has sat for nearly all of those 42 years). When the gun goes off you’ll immediately pass the city park, full of booths, food and a water fountain on your left. Mom and Pop businesses line the street of the next block before hitting the grocery store, the bank and finally the town’s one stoplight. Run through the light and smell the sweet smells of the local Burgerville (make a note to come back for a strawberry milkshake) as you run up a slight incline before dropping most of the 47 feet. Then it’s around a sweeping S-curve you go, past the little league baseball field and the fire station to your left. You’re halfway there and as you reach the Les Schwab tire center little kids will hand you cups of water.

Entering Independence you’ll pass Mendi’s Pizza. Make a note to come back here and eat. Seriously, make a note. And come back here and eat. The high school is now on your left after which you’ll come to the light in Independence, the Roth’s grocery store on your right. Another quarter mile and you’ll be running downhill again for the remaining elevation drop and then it’s a straight, flat shot to the finish line. Trees line the street and provide some much wanted shade as your heartbeat races and you’re gasping for air. 11th street, 9th street (be sure to run through the lady’s sprinkler here), 6th street, you can see the finish now, just four blocks away. As you reach 2nd street you run through the corral and through the finish line, rewarded with apples, cliff bars and water. You’ve completed your mini-marathon.

If you’re like me, you immediately turn around and make your way back to the starting line where the rest of your family is sitting enjoying the parade, encouraging the runners behind you and stopping every so often to catch up with friends and families of friends you haven’t seen in a while. It’s an all-around great race, low in cost, high on fun and worth the trip to Monmouth, OR. 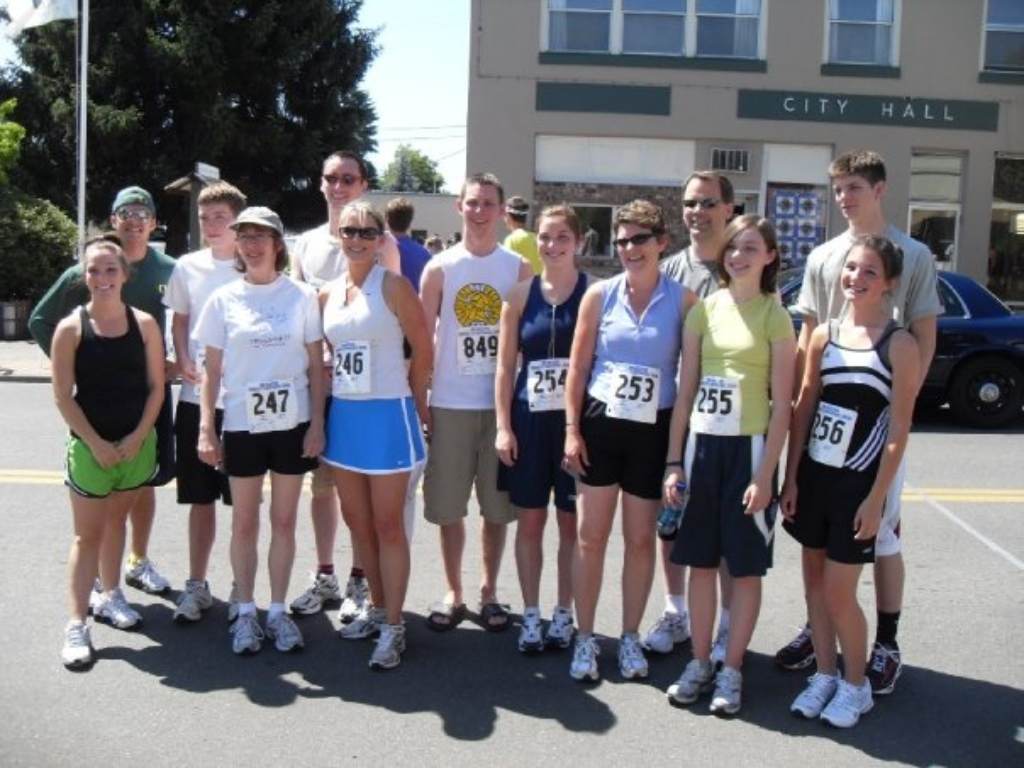